Track Plan and some Prototype Photos

I've been working on the Geneva Subdivision for almost two years now and I still don't have a track plan.  Hopefully that will be solved shortly as a friend from Canada has graciously volunteered his services to put a track plan together.  Below is a drawing I did in Microsoft Paint that I sent him along with a bunch of aerial photos of the layout.  He will be using the information to put together the track plan.  THANKS JUSTIN!!!
If you are interested in the pictures, they are all contained in a zip file located @ http://www.stpaulrochelle.org/gsarialshots.zip
I'm also including below some prototype photos that I took in Rochelle today in the 90 degree heat.  Enjoy! 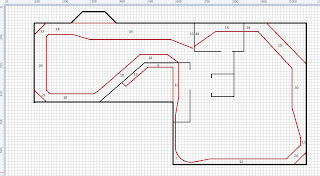 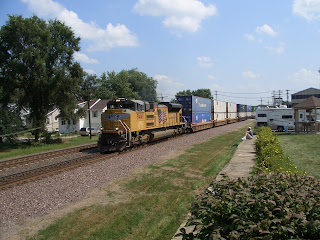 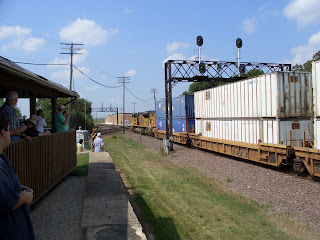 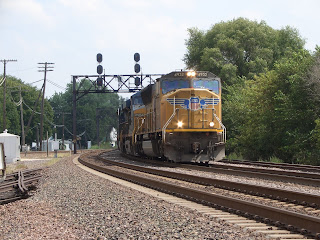 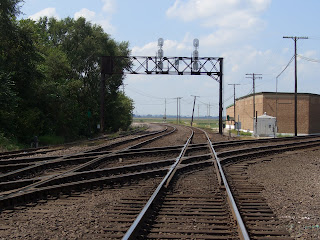 Posted by genevasub at 5:45 PM 2 comments: Links to this post

Thought I would post some pictures of the basic scenery that has been installed past the diamonds in Rochelle.  I now have basic scenery in place from Nelson up to 1/2 of Rochelle. These pictures not only show the basic scenery in place, but also show a couple of reasons why I tore out the old layout and started over on the Geneva Subdivision.
Reason number one is curves.  The old layout had too many curves, had curves that were too sharp and had S curves that were too close together.  The first pictures below are from the Rochelle Subdivision.  Quite of few people really like the pictures and I have to admit they look pretty good.  To be honest, though, this is one area of the layout that I did not like because, while the curves may be photogenic, it in no way represents what the Union Pacific looks like in Northern Illinois.   There just are not S curves like that in Northern Illinois. 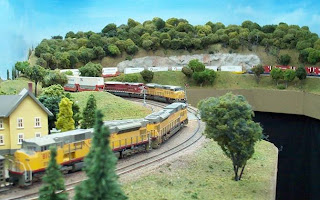 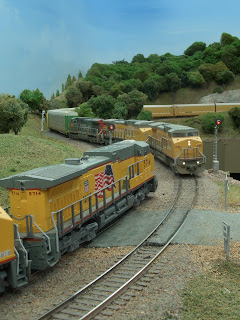 Being a pretty flat region, there are a lot of straight aways in Northern Illinois.  Any curves are very broad and the S curves that do exits look much more like the picture below from the Geneva Subdivision. 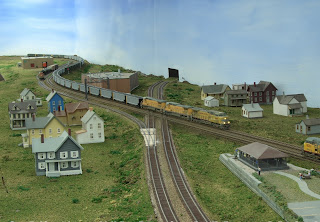 One of the main reasons to start over was to build a layout without any peninsulas with their 180 degree turn back curves and the resultant sharp S curves.  The Geneva Subdivision not only does not have any 180 degree turns, the 90 degree curves it does contain have 36" minimum radius.  These standards are very important in order to capture the flat, straightness of Northern Illinois.
Reason number two for starting over was to get more topographical relief around the Rochelle Railroad Park.  On the Rochelle Sub, I put the Railroad Park area on a flat piece of plywood.  While Northern Illinois is flat,  its not flat as a board. Below is the Railroad Park on the Rochelle Sub.  As you can see, the ground from the pavilion to the tracks is flat as a board.  This always bothered me. 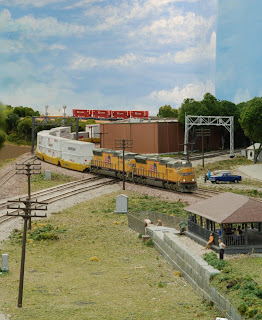 This time, I made cut outs in the plywood between the pavilion and the tracks so that I could model some relief in that area.  As you can see below, the area is not nearly as flat and, in my opinion, looks more realistic. 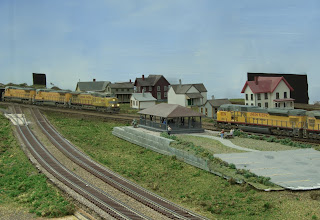 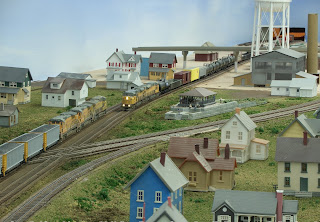 A couple of major improvements for the new layout, but just a small part of the large number of reasons for starting over.  I'll be posting more reasons in the near future.
Daryl
Posted by genevasub at 7:37 PM 9 comments: Links to this post

Finally got my hands on a Walthers MiJack kit for the Rochelle Global III intermodal yard.  The kit is of average quality in my opinion.  Pretty easy to put together, although there are a couple of somewhat difficult steps at the beginning of contruction.  Once you get past those, however its all pretty straight forward.  Detail is good overall with the exception of the ladders.  They are very chunky.  I did not use the ladders that came with the kit.  Instead I will be using some better ladders I have leftover from other kits.  The railings are also a bit thick, but not as bad as the ladders.  I will keep them on for now and possibly replace them later if they detract from the overall scene.  Even thought the kits is just average in quality, I really like it because the MiJack crane is a very cool looking piece of machinery and is crucial for any intermodel scene.  I am very happy with how the model fits with the spacing of the two tracks.  The crane can straddle both tracks for transferring containers from one railroad car to another or it can straddle just one track to transfer from railroad car to truck or vice versa.
As you can see, the model still needs to be painted and the part that actually picks up the cars needs to be attached.  I figured I would wait till after painting to attach it.
I may add a second MiJack crane for the yard as most prototype intermodel yards have multiple numbers of cranes in operation.  I counted just two on the sat photo of Rochelle Global III, but I sure they will add more it the yard ever gets anywhere close to capacity useage.  Last I heard it was operating at 15% capacity! 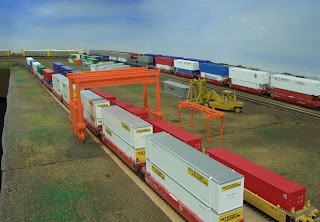 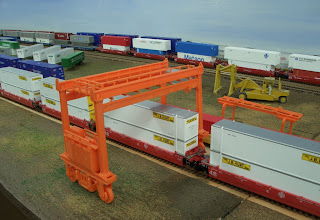 Posted by genevasub at 6:16 AM 2 comments: Links to this post

Did not have a good day today on the layout.  Decided to spend some time this morning instaling a six light signal bridge in Rochelle.  For some reason, these signals had three wires which were identical to each other.  All the other signals have a silver wire for ground and two copper wires for the red and green LED.  Makes it a cinch to hook up correctly.  Not these, I had no idea which one was the ground and had to figure it out by trial and error.  And, since the lights are aboove the layout and the wires are below the layout, it meant a lot of getting up and down to check to see if I found the ground wire.  To add to my frustration, it turns out that three of the six lights have the red LED not working correctly for some reason or other.  Now, looking at the picture below, I've come to the conclusion that this bridge won't work anyway since the prototype spans all three tracks and no just the two mainline tracks.  The third track is the interchange track.  Was not that noticable on the Rochelle Sub as I did not have the third track in place.  Now that the third track is there, the bridge just looks wrong to me.  So,  I may have to scrap this bridge all together and start fresh.  Although I may try to reuse parts of it in building a new one to span all three tracks and, of course, have all the lights working.  Luckily it was really nice outside so I felt much better after bike riding with my wife and grilling out some brats for supper. 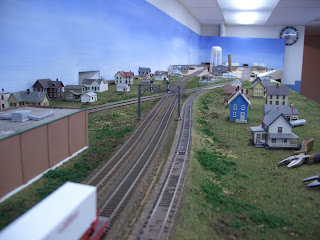 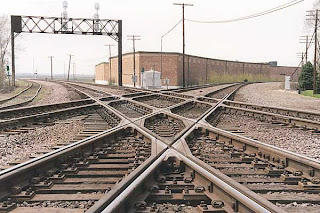 Posted by genevasub at 9:17 PM 2 comments: Links to this post

Here's a short video showing the installation of signalling to this point.  There is just one eight foot section left to scenic in this room although there is still tons to do as far as adding trees, static grass, ballast, etc.  I will probably continue with the basic scenery and track painting on the rest of the layout so that I can get all the signalling installed.  Then I plan to do a lot of work on my rolling stock.  More on that later.  I will go back eventually and try to complete each section of the layout like I did with the Rock River crossing.  Should be fun!!!!

Posted by genevasub at 7:14 PM 7 comments: Links to this post

Congratulations to John LaRocca for being the lucky winner of the Atlas gp40-2. Turn's out that John and I have emailed back and forth a few times already. John's also into hand building turnouts, although he does his freehand without any Fast Track assembly fixtures. Below is a double slip turnouts he built. I'm glad I did not have to build 113 of those!!!! John also turned me on to Scale Models Division which makes very nice signals. You'll be hearing more about these signals in the near future as I already have 4 on order and will be posting pictures as they get installed on the layout. There website is http://scalemodelsdivision.web.officelive.com/default.aspx  Congratulations John, I'll be getting the gp40-2 into the mail today, hopefully.  Take good care of it! 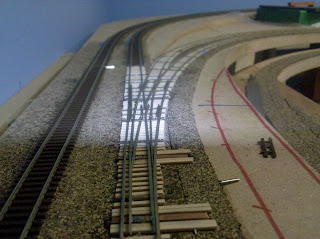 Posted by genevasub at 5:41 AM No comments: Links to this post

Posted by genevasub at 11:51 PM 2 comments: Links to this post

A small accomplishment, yet a milestone for the Geneva Sub

Its just another turnout being installed.  But, its a major milestone as it is the LAST turnout for the layout.   The turnout below is the 113th turnout I've built and installed on the UPRR Geneva Subdivision.  Its a pretty good feeling to get the final turnout in and installed.  It was 21 months ago that I built the first turnout and for a while there it seemed like building turnouts was the only thing I was doing.  Its been fun to move on to scenery and installing signals.  My next big task is doing scenery in Rochelle which will complete scenery in that room and will allow me to install signals for the Rochelle BNSF/UP diamonds and also do some work on the floor in that room which is in pretty bad shape right now.  I plan to do a post on siganlling progress tomorrow or Saturday with some video.  Also, don't forget to check back on Sunday for the announcement of the GP 40-2 contest winner. 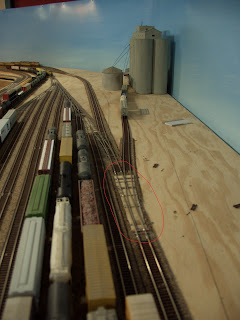 Posted by genevasub at 6:39 PM 7 comments: Links to this post 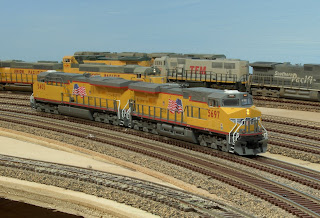 Just kidding, I'm not giving away my GEVOs.  But, I am giving away an Atlas Union Pacific GP40-2.  Just a way to say thank you to everyone for following the blog.  The unit is about 10 years old and, to be honest, I have not run it in about 3 years.  I did test run it a bit today and it is operational, but probably needs a good cleaning and tune up.  The unit is being given away as is.  No returns!!!!!!  It does have Micro Trians couplers, the original case and, oh yea, an Atlas slow speed motor.  If requested by the winner, I'll send along the original motor as well.  No DCC decoder. To win the GP40-2 all you have to do is comment on this post indicating you want to enter the contest. No need to be an offical follower of the blog and no need to give me your address just yet, you can do that if you win.  The contest will run for one week with the winner selected next Sunday, August 8.  Good luck to everyone!!!!  Below are pics of the unit. 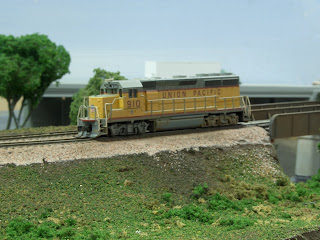 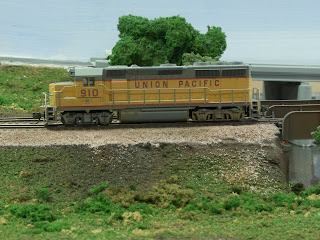 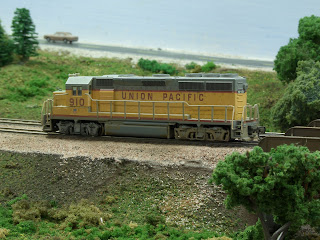 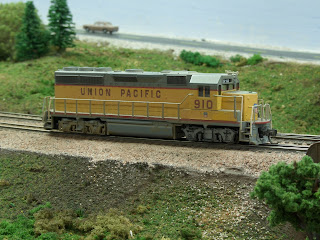 Posted by genevasub at 2:51 PM 62 comments: Links to this post