Non Railroad Indutries Near the Yard

Took a couple of detailed pictures of the non railroad industries installed last week.  The loading dock in the first building needs some work still. 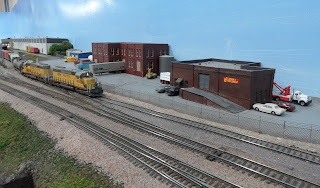 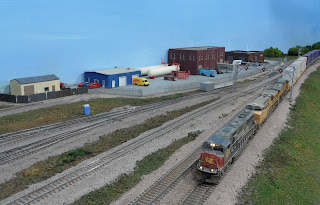 Posted by genevasub at 5:34 PM No comments:

Here's a video of trains running past the latest two layout projects.

Just east of the two large warehouses next to the Proviso/Clinton yard was a area that needed additional businesses that would be near a railroad right of way, but not necessarily with rail service.   Rather than scratch build actual prototypes from the Clinton area, I just threw some buildings from my previous layout, the Rochelle Sub, in the area to see how they fit.  Over time I messed with numerous different orientations.  I was looking for a mix of old and new structures that are common for a lot of present day industries.  Below is the orientation that I finally settled on. 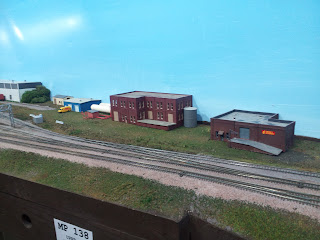 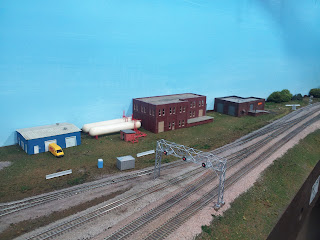 With the location of structures set, the next step was putting in a parking lot for the industries.  I wanted the parking lot to be old and in somewhat disrepair as you would typically find near a railroad right of way.  I first marked off the boundaries of the lot and used Woodland Scenics "Smooth It" plaster to fashion a lot. 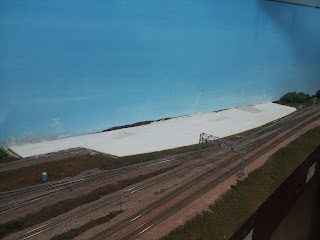 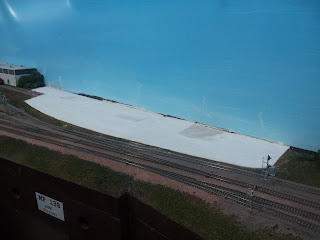 Once the plaster was dried I painted it a light gray and added gravel around the edges and on the lot itself.  The gravel on the lot was to represent where pot holes has been filled in.  A 6' chain link fence from Gold Metals Products completed the project.  I did not have quite enough chain link fencing on hand, so I filled in the last bit with wood fencing.  The wood fencing adds to the ad-hoc look of the scene. 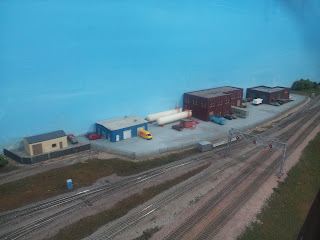 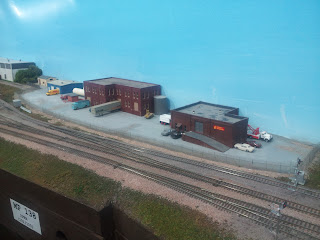 Posted by genevasub at 12:06 PM No comments: