Posted by genevasub at 9:01 AM No comments:

Posted by genevasub at 3:45 PM No comments:

I used the drawings from David K. Smith to throw together a mock up of the structure.  I used 65' for the overall height.  My goal for the mock up is to get a feel for how the finished structure will look on the layout.  I've included some rolling stock, vehicles and a portable toilet in the pictures to give a size comparison. 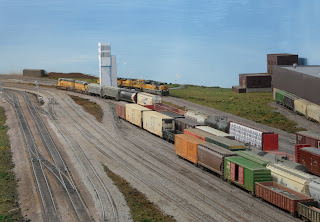 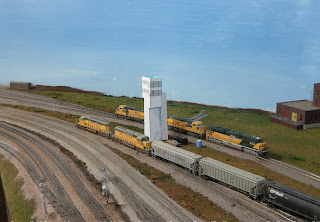 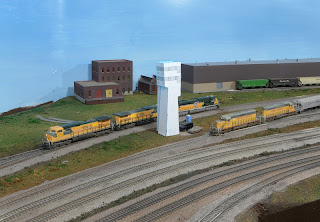 David K. Smith to the Rescue.

Well, I posted the pictures to the Railwire N scale forum looking for advise on the overall height and angles and I got way more than I ever anticipated.  David K. Smith used to pictures to come up with drawings of the structure from all four sides.  Thank you David!  I will use the drawings to build a mock up of the structure at 65 scale feet.  Once the mock up is placed on the layout, I will decide on whether to scale it down in size or build it as is.

Posted by genevasub at 1:57 PM No comments:

Its time to begin the next new project for the UPRR Geneva Subdivision; The Proviso Yard Control Tower. The extreme uniqueness of the prototype should make it another signature element of the Proviso Yard section of the layout. As you can see from the photographs, the control tower looks more like it belongs at an airport than in a railroad yard. It has a very unusual angles that will be a challenge to replicate in a model. What makes it harder is that its location makes it difficult to photograph. Being in the middle of the railroad property makes taking close up pictures without major trespassing an impossibility.  Its was also difficult to get straight on pictures that are needed to determine proper dimensions and angles.
The first dimension to determine is the overall height of the building. Using the third picture below I came of with an overall height of about 75 feet.  I got this by assuming that the windows were floor to ceiling at 8 ft in height.
The next dimension is the angle off square of the front and back walls of tower control house, which would mach the angle off square of the tower base.  Right now I am guessing 2-3 degrees off square.  I got this by taking the average of the front and back walls compared to the horizon.  I have no idea if that is correct.  Any ideas out there? 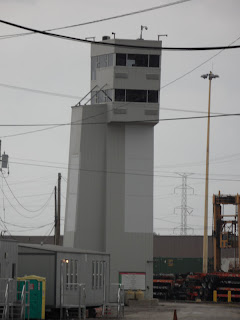 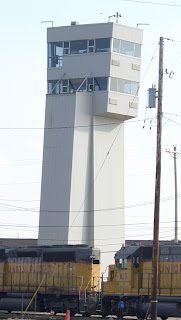 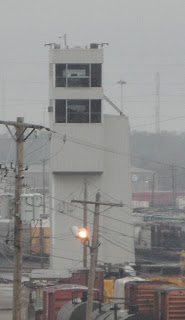 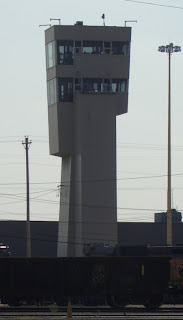