Here's a video showing how I install resistors on wheel sets so that each car can be detected by the computer controlled signaling system.

I have embarked on a project that's a long time coming.  There was a time, about ten years ago,  when all my rolling stock had body mounted couplers.  It really help with eliminating derailments, especially when back up long strings of cars.  For some reason though, I got away from doing this and almost all the cars I have purchased over the past ten year have retained their truck mounted couplers.  This was not that much of an issue on the old Rochelle Sub as the manifest trains did not surpass 20 cars in length.  On the Geneva Sub, however, manifest trains can easily exceed 30 car lengths and sometimes top 40.  Truck mounted couples together with long train lengths can caused derailments when backing up a train even on #8 hand laid turnouts. Having half body mounted and half truck mounted adds to the problem.  Derailments occur in the proviso yard when the yard crews are sorting and building trains.  The derailments are rare, but do occur and can be a distraction from the realistic operation of the railroad.
So transitioning to all body mounted has begun.  I started with the 25 Athearn tank cars.  These are beautiful cars with a lot of delicate detail. I did 10 of them yesterday and the first few took quite a while due to detail coming off from my handling of the cars.  Once I concentrated on not making contact with the detail, things went along much quicker.  I basically clipped off the coupler from the truck and glued it to the end walkways and underframe of the cars.  Some of the cars required a piece of sheet styrene between the walkway and coupler in order to get the coupler to the correct height.
Another project that I will be working on simultaneously with the body mounted couplers is resistor wheel sets.   The signaling system will work much more reliably when all rolling stock is detected on the layout.  Right now only the locomotives and last car of the train are detected.  The resistor wheel set are made by gluing a surface mount 10000 ohm resistor to an axle and using conductive paint to make the electrical connections between the resistor and the axle and wheel.  Eventually, I will have one resistor wheel set on every car on the layout. 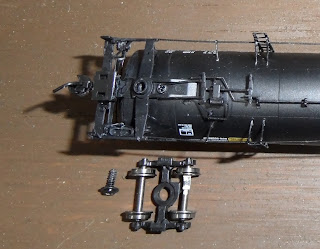 I decided to expand the length of both staging yards today in order to better handle longer trains on the Geneva Subdivision.  Ended up adding 22 inches to both yards which will add about five cars to the storage capacity of the tracks.  Not a real exciting project, but one that I wanted to do for some time now.  Maximum storage length is about 44 coal cars with 3 locomotives.  While most trains are shorter than this length, the expansion will give the railroad the ability tp handle the extra lengths when necessary. 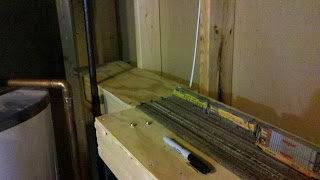 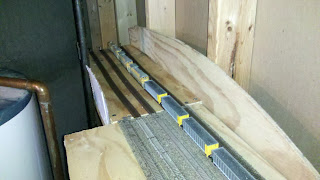 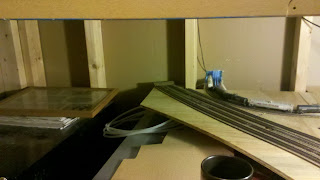 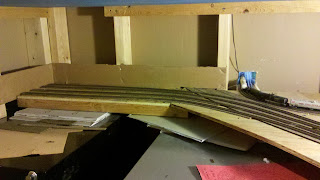 Posted by genevasub at 5:12 PM No comments: