As you can see from the single posts since January, I have been spending a limited amount time with the railroad over the past few months.  General busyness at school plus the passing of my mom in January and sister-in-law in April definitely placed the UPRR Geneva Subdivision on the back burner for 2013.  Time on the railroad has been mostly in small blocks that has been used mainly for just running trains for relaxation.  With summer just around the corner, however, I do expect to be tackling some major projects very soon.   A couple of things I have been able to accomplished is locomotive wheel cleaning and installing body mounted Micro Trains couplers on Kato intermodal cars. 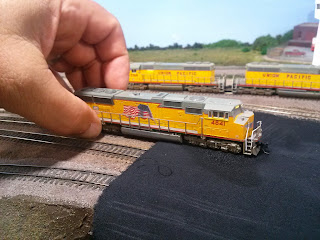 Using all metal wheel sets on the layout really reduces the dirt build up on track and wheels.   Things still get dirty however and after four+ years, my locomotives were beginning to show signs of reduced electrical contact with the track.  So in the last half of March I began a locomotive wheel cleaning program for my 48 locomotives.  This was a good project for this time as I was able to do a 2-4 units here and there until the last ones were completed just last weekend.  I used an alcohol soaked cloth laid over the rails to clean the locomotive wheels.  One set of wheels are on the rails while the other is on the cloth while the throttle is set on full.  The spinning wheels on the alcohol cloth clean up very quickly.  I then removed the brass strip wipers and clean the contact areas with a bright boy.  Lastly, I apply a very, very small amount of "Rail Zip" oil to the wheels.  I do this by putting a small amount on the rails and then sliding the unit over the rails with its wheels spinning.  This last step is very important as the alcohol gets the wheel "too" clean which exposes the metal to oxidization and the conductivity ends up being even worse.  The oil improves conductivity and protects the metal from oxidization. 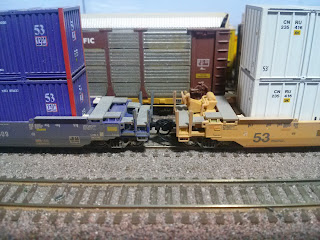 Over the years I have purchased 10 sets of  Kato Maxi III and Maxi I double stacks.  I really like these models as they are reasonably priced, look great and run well.  However, I have never been impressed with Kato's couplers.  While they will couple with other brands, they both couple and uncouple with more difficulty than I like.  Also, the couplers are truck mounted and sprung too tight which makes them prone to occasional derailments. So I ordered a 10 pack of Micro Trains unassembled 1015 short shank couplers and spent a Saturday morning cutting off the Kato couplers and body mounting the 1015s. 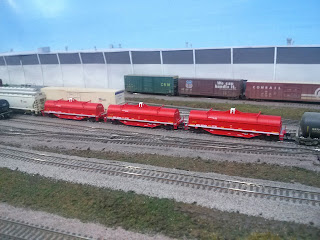 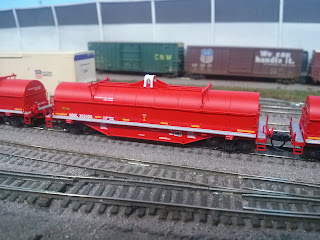 One more thing before I sign off.  I ordered three of the Atlas Steel Coil cars.  These are my first steel coil cars for the layout.  I have to say that I was really surprised to see how small the cars are.  They are easily the smallest cars on the layout.  At first I was thinking that the small size meant that these cars are older than I thought; maybe from the 60s and 70s.  I found the prototype on the internet, however, and learned that my NOKL units were built in 2007.  Quality wise these models are outstanding.  The detail level is very high and the come with body mounted couplers and metal wheel sets.  I may be adding a few more of these cars to the fleet in the near future.

Posted by genevasub at 7:04 AM 3 comments: Links to this post