Here's some pics of the Whipple bridge.  No onto bridge piers and a camel back bridge. 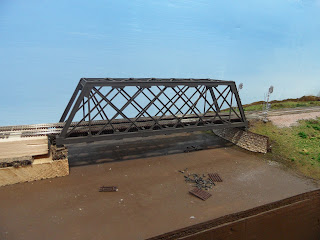 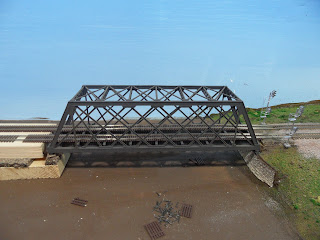 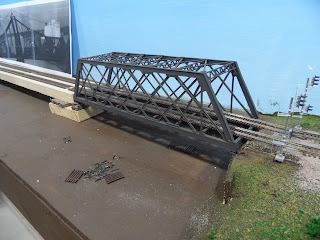 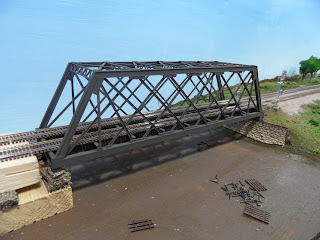 Posted by genevasub at 5:20 PM No comments:

The Whipple bridge has been assembled and is now ready for painting which will be done later today.  I did make one addition to the trusses before assembly.  I noticed on the prototype photos that the trusses have gussets on the bottom as well as the top.  So, I used styrene strips to add gussets to the bottom of the trusses.  Hopefully I will also be able to get the bridge installed today or tomorrow.
Next will be constructing a couple of bridge piers and then the camel back bridge. 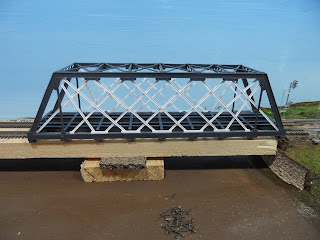 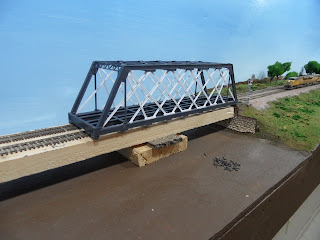 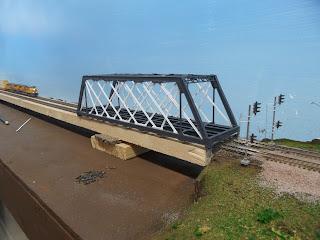 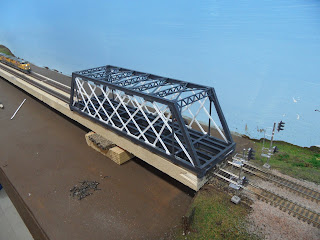 The layout is finally to the point where it is time to build the Mississippi River bridges.  The prototype bridges I will be modeling are pictured below.  There are three bridges, one large rotating bridge for barge traffic, a camel back truss and a Whipple truss.  There are no kits available for any of the bridges that I know of, so kit-bashing and scratch building will need to be used for the bridges. 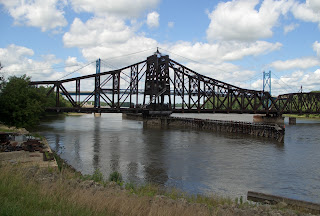 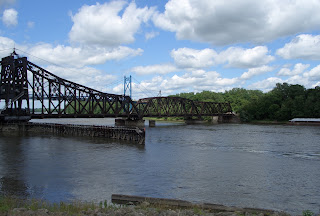 I am beginning with the Whipple bridge and will do the camel back next and save the rotating bridge for last. I decided to use the Walthers double track through truss bridge kit as a starting point for the bridge.  The two pictures below show the Whipple bridge.  The second one was taken from a long way off, but it was useful in getting a clear idea of how the cross members are arranged.  In fact, I used a printout of the picture as a template for cutting and gluing the cross members. 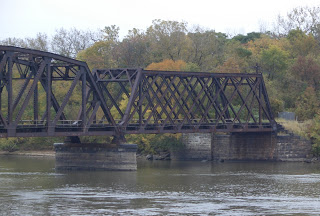 I began by cutting off almost all of the existing cross members of the Walthers kit.  The kit has four trusses for each bridge with two trusses being glued together to form a single truss so that you end up with the two trusses for the bridge. When cutting off the braces, I made sure to keep the upper gussets on the outside trusses and saved the three gussets from the bottom and glued them to the top so that there are five gussets on the top and none on the bottom as on the prototype. In the picture below you can see one of the original trusses on the top.  In the middle is an outer truss with two braces intact and the five upper gussets   On the bottom is the inner truss with all of the braces removed and just the two corner gussets remaining. 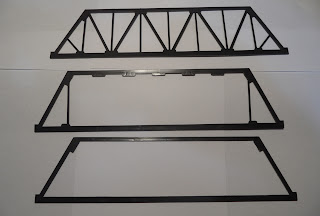 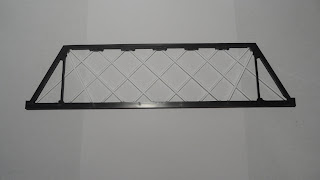 I will continue to post pictures as the project continues.  Stay tuned.
Posted by genevasub at 7:29 PM No comments:

After using an airbrush to weather the rails, ties and ballast, I decided to post a couple of pictures of the final results. I first hit the rails and ties with Floquil rust and then used Floquil weathered black lightly over the ballast rails and ties. Ballasting is not my favorite part of building a model railroad, but I do like the results. So far I have about 30 feet of double track mainline done with about 70 feet left. And that does not include the yards, secondary track and industrial spurs. I will not do that all once. I'll do the rest of the mainline in Proviso this week and then will switch over to other projects. 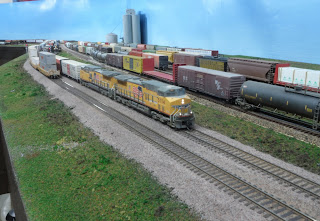 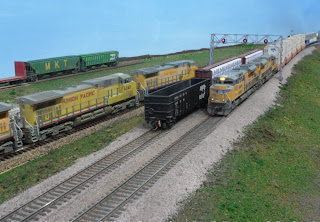