Final piece of the Mississippi River bridge is the stairway up to the control house which I did this afternoon. I've been putting together an article about the contruction of the bridge. Which magazine should I submit it to; Model Railroader, N Scale Railroading or N Scale? I'm leaning toward N scale Model Railroading, have not decided for sure. 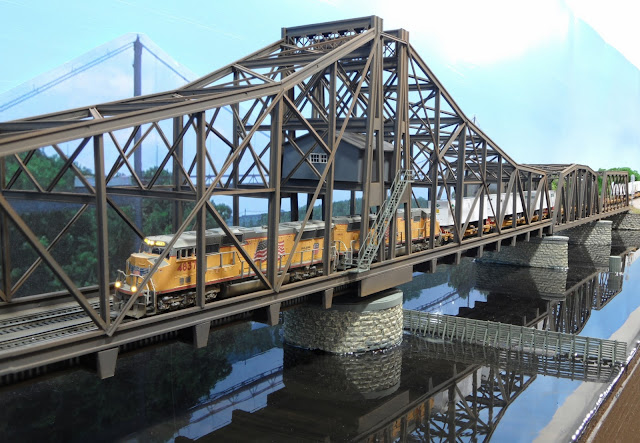 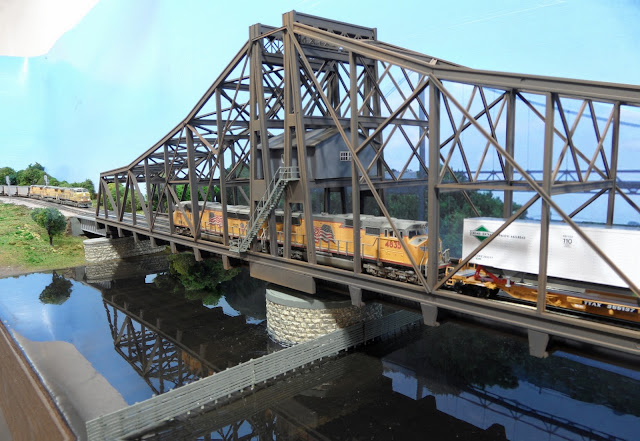 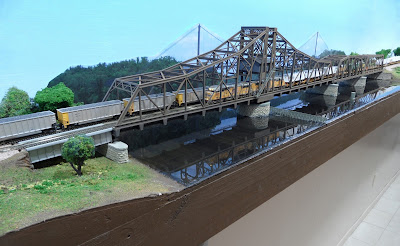 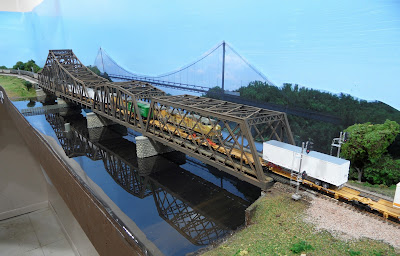 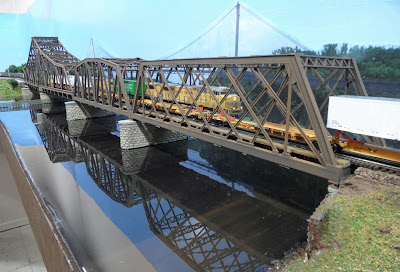 Posted by genevasub at 4:53 PM 7 comments: Links to this post

Last week there was burning odor in the basement that I could not identify. It had an electrical burn smell that was pretty strong. When I went into the Franklin Grove / Rochelle room the smell was even stronger. I checked the entire layout, especially the underside, but could not find the source. I even had my wife, who has a very strong sense of smell, come down and check, but she could not find it either. I finally concluded that it must be one of the florescent light ballast burning out so I turned off the lights and the layout to see if the smell would go away. After a couple of hours the smell did decline and then eventually went away altogether. I still used the layout over the past few days, but never more than an hour or so and the smell stayed away. I figured the lights needed to be on for a few hours before the burning would begin again. Yesterday, I was running the BNSF switcher in Rochelle when I needed to move some auto-racks from the BNSF tracks that I had hastily put there when the BLMA spine cars came in and I needed a train to put them on. This is what I found under one of the auto-racks. Looks like I did not put the auto-racks on the track correctly and one of the wheels shorted out the turnout. You can't see this from the picture, but the insulated wheel closest to the short was melted off the axle. What I can't figure out is why the short did not trip the PM42 power manager which was set to trip at @ 3.5 amps. Even with all the soot, the turnout frog passes the "quarter" test. Anyway, I set the PM42's to trip @ 1.5 amps. This new setting may cause a problem during operating sessions. We'll see. The auto-rack actually looks kinda cool. Might just keep it that way. 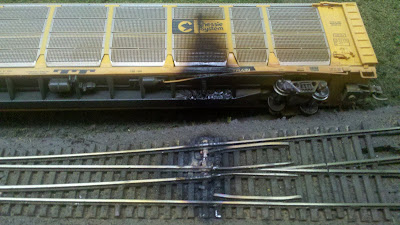 Posted by genevasub at 7:03 AM 2 comments: Links to this post

Our daughter Kelly and her husband Dan are proad parents of Patti and my third gradechild and the newest model railroader Zayden Daniel Avicola. He's quite adorable as you can see! 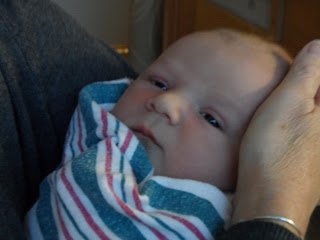 Posted by genevasub at 2:49 PM No comments: Links to this post

Okay, this is the last Mississippi River post for a while.  I need to move on to other areas of the layout.  I think I am obsessing on this project!

Posted by genevasub at 12:59 PM No comments: Links to this post

Just a few quick pictures of the bridge with the photo backdrop of the Highway 30 bridge.  The first picture is the prototype, of course. 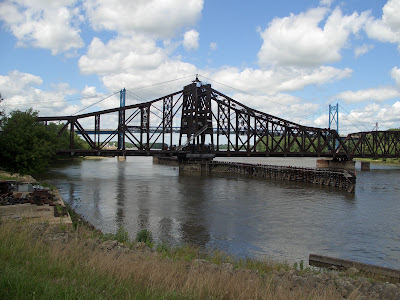 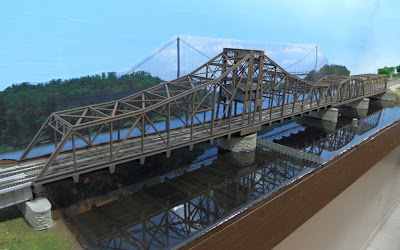 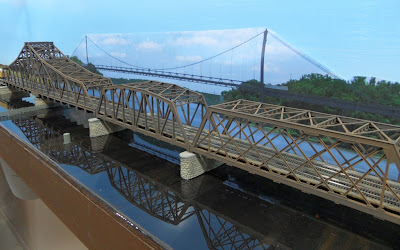 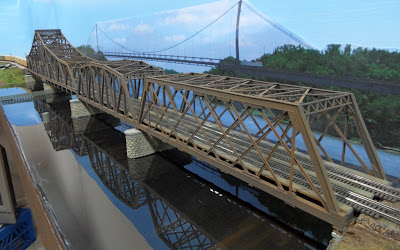 Posted by genevasub at 5:41 PM 3 comments: Links to this post 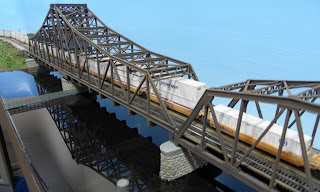 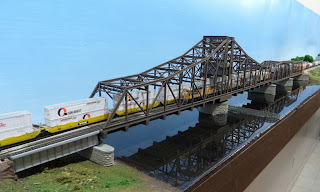 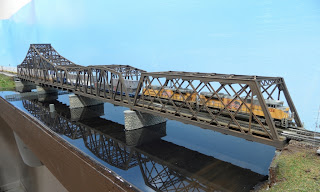 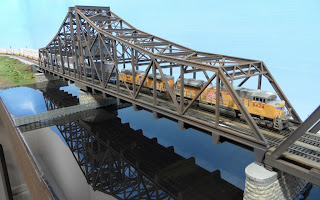 Posted by genevasub at 12:27 AM 4 comments: Links to this post

I am so close to being done with this project!  Yesterday I painted the waterbed, installed the barge fence & protective pylons, weathered the bridge piers, applied a coat of Envirotex gloss finish and airbrushed the bridges with layer of rust.  Today I plan to put guardrails on the bridge track, paint them and install.  That will pretty much complete the project although I will still need to put the stairwell on leading up to the control house and I need to do something to add ripples to the water.  Its way to reflective!

I post more pictures later today or tomorrow with the bridge tracks installed and trains! 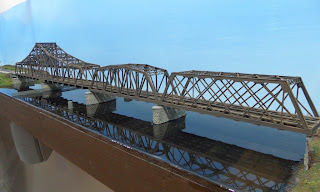 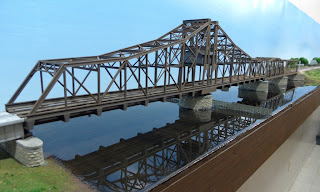 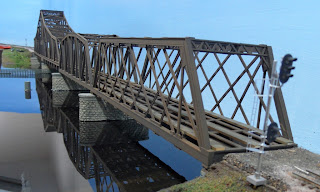 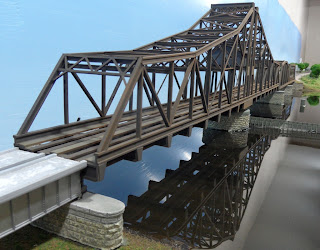 Posted by genevasub at 7:35 AM 2 comments: Links to this post

Just added the final pieces to the rotating bridge before weathering takes place this weekend. The final pieces are the two end braces. I made these out of Plastruct 1/2" open web trusses. At the very beginning of the video you can see the braces. I also installed walkways in the two smaller bridges and painted all the walkways grey. The video has some good close up shots of the structure of the bridges.

Next up I will remove the bridges one more time so that I can paint and clear coat the waterway, add guard rails to the track and paint the track. I hope to get this all done this weekend.

Posted by genevasub at 7:04 AM No comments: Links to this post

I was really excited to see the prototype video in my last post.  Until I realized that the bridges have interior features that I could not ignore.  The bridges have walkways both between the tracks and outside each track.  Looking at my photos, I guess I should have know this as a few shots definitely show the walkways.  But it was the video that convinced me that I needed to add the walkways to my bridges.  So, after doing some measuring and some calculations, I determined that .060"X.250" styrene strips would do the trick.  Once I had the strips installed I airbrushed the entire bridge Floquil weathered black.  I think I need to go back yet and paint the walkways a dark grey to match the prototype and stand out more.  Once I get the walkways installed in the other two bridges, I will give all three a moderate air brushing of Floquil rust.   In addition to being more prototypical and looking good, the walkways make making sure the track is in straight very easy.

I also included a video update. 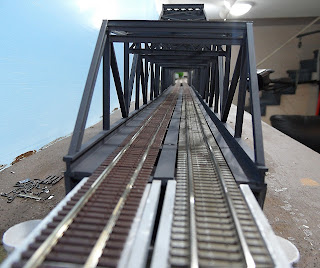 Posted by genevasub at 7:13 AM No comments: Links to this post