I've been on a weathering frenzy for the past few months.  In all, I have weathered 14 locomotives, 63 general freight cars, and 56 crude oil tank cars.  That's a lot of wreathing.  How did I get into a situation where I had so much non weathered rolling stock?  Well, it all started about 6 years ago when to weather by rolling stock with an airbrush.  I never really had any luck with acrylics and found the enamel paint much easier to work with.  When the Floquil line was discontinued, my weathering discontinued as well.  Although my weathering had stopped, purchases of new rolling stock continued. So, I ended up with a large number of non weathered rolling stock.

With larger and larger amounts of rolling stock non weathered, the look of the layout suffered.  So, I finally broke down, purchased some Model Master acrylic paints and began experimenting with wreathing techniques.  Back when I painted the track on the layout, I purchase a new compressor and airbrush.  My old compressor was small and cheap when I got it 20+ years ago and was not putting out air like it used to.  The new compressor really made a big difference as I quickly found out that my issues with acrylic paint was due mainly to a lack of sufficient air flow.  After a few practice tries on some old throw away cars, I felt confident enough to get started on the real thing.

Below are some videos I shot showing my weathering techniques.  I did all the weathering in batches.  With such a large fleet and a large layout, it is important that these types of task be streamlined to get a good overall look without taking up an enormous amount of time.  Maybe someday, when I am retired, I will go back and get more detailed in the weathering.  But for now, I got a railroad to build!

I still have a few coal cars and intermodal cars to weather, but very soon I will be moving back to layout construction.  There are a lot of areas needing streets, buildings, trees, details, etc. Look for a survey coming soon on which area of the layout to work on next.

Improvements to Lone "Turn-back Curve" on the Geneva Sub

Turn back curves are locations on layouts where the track makes a complete 180 degree turn in direction.  Although almost all layouts have them, they are quite up prototypical in appearance.  When the layout was back in Rochelle, IL there were zero turn-back curves on the layout.  Here in Georgia, our basement has a narrow, 9' X 22' section where a turn-back curve is unavoidable.  So, the challenge is to disguise it a bit by breaking the curve into two sections with a scenery block.  I chose to use a small area of woods that are common in northern Illinois.  The trees do a great job of breaking up the curve and makes the scene a bit more prototypical looking. 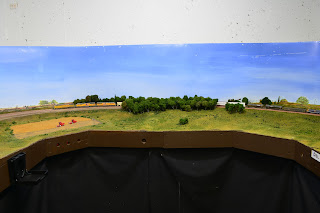 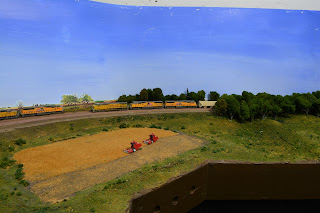 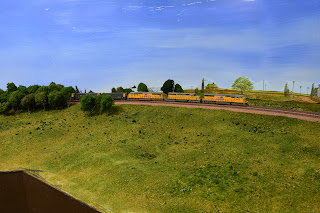 Posted by genevasub at 3:45 PM 8 comments: Links to this post

Roads have been added to the area around the Elmhurst Metra Station.  Woodland Scenics paving plaster was used for the road surfaces.  Styrene was used for sidewalks and Line O Tape 1/32" pin-striping was used for road lines. A backdrop has also bee added to the area.  Road signs, street lights  and people will be added next. Lots of work and detailing still also needs to be done on the buildings. Stay tuned! 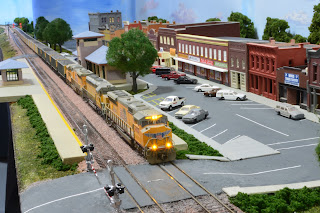 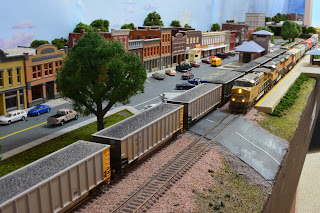 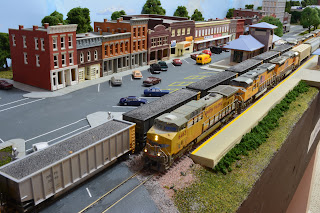 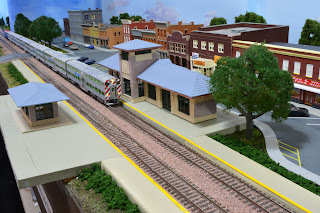 Posted by genevasub at 3:31 PM 2 comments: Links to this post