A major improvement of the Geneva Sub over the old Rochelle Sub is the ability to run BNSF trains across the Rochelle diamonds.  To do this a loop of BNSF track is included in the track plan. The only part of the loop that we want to see is the part that crosses the diamonds and runs through Rochelle.  The two curves of the loop are already behind the backdrop, but there is a need to hide the tracks running along the back drop in Rochelle (refer to the track plan in a previous post).  To hide these tracks I used 1/8" masonite cut into 3.125" strips.  The masonite is mounted using simple angles glued to the masonite and screwed into the plywood.  I then painted the strips to match and blend in with the original backdrop. Below are before and after shots of the area. 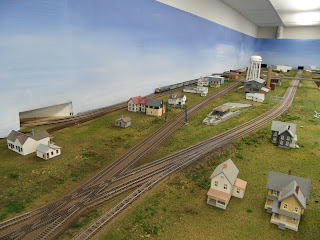 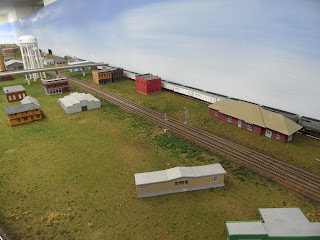 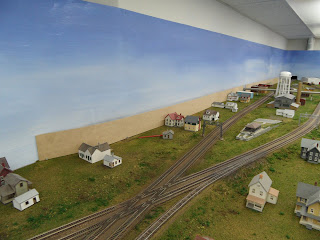 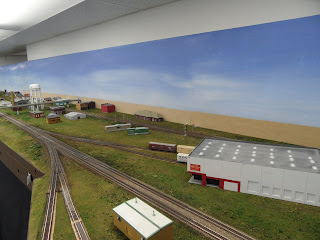 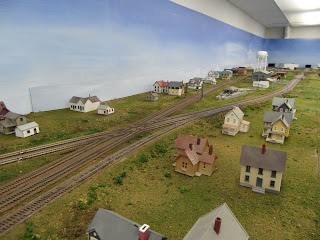 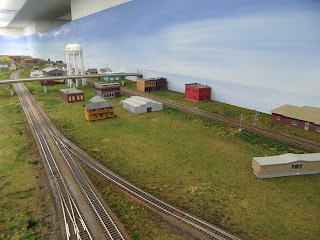 Time to Pick up the Pace on Posts

Can't believe its been a month since my last post.  School's out for the summer though, so you can expect a flurry of posts over the next few weeks.  I'm planning on doing some weathering this week and next with hopefully a video showing how I weather bunches of cars on one time.  After that, there will be ballasting, bridge building, modelling water, photos on backdrops, structures, roads, etc.  I plan to start with Fulton, then move on to the Mississippi River, the Clinton/Proviso Yard and the Proviso Engine Facilities.  If I get all that done this summer I will be very surprised. Stay tuned!
Posted by genevasub at 7:41 AM No comments:

BNSF Crosses the Diamonds in Rochelle

A big thing missing on the old Rochelle Sub layout was BNSF trains running through Rochelle.  The BNSF tracks were there and they were used by the the BNSF switcher, but the tracks dead ended into the backdrop and off the edge of layout so that there was no way to run through-trains on the BNSF tracks.  In designing the new layout, one of the things I wanted to incorporate was running BNSF trains across the diamonds.  As you can see from the track plan below, the new layout has a loop of track for the BNSF. 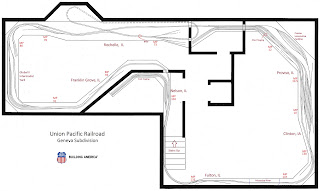 Most of the BNSF loop track is or will be hidden, including the sharp turn-back curves that make the loop possible. During operating sessions, two trains that will be stored in the hidden portion of the loop will periodically make their appearance and run across the diamonds.
This weekend, I finally completed laying track for the loop so that BNSF trains can run across the diamonds and through Rochelle.  Unfortunately, I do not have any BNSF equipment, other than the BNSF switcher.  So, in the mean time the BNSF switcher will have to pull double duty and an old Athearn CSX SD70 will fill in.  I also threw on some NS coal cars and triple crown road railers from a friend (thanks Andy!). Below is a video of some initial BNSf action on the Geneva Subdivision.  Enjoy!