Posted by genevasub at 6:13 PM No comments: Links to this post

Here's the eastbound signal bridge at the east Proviso yard entrance.  Again the bridge is a modified NJ International signal bridge kit with modified BLMA signal head kits.  The first picture is prior to painting the signals (bridge is reused from the Rochelle Sub layout).  The signals do not yet have the visor/shades installed as I install those just prior to painting so they do not come off during installation of the signals onto the bridge.  The second set of photos is after painting the signals.  Notice how much brighter the signal lights appear to be with the targets painted black. 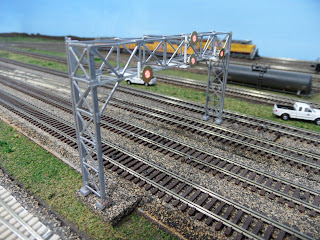 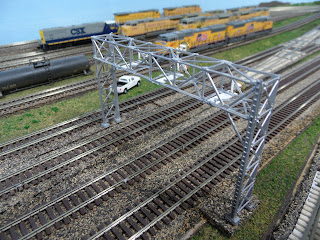 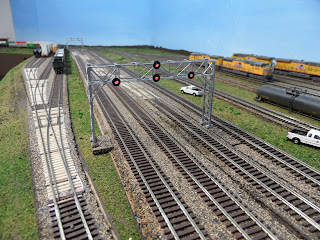 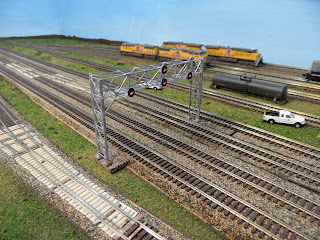 Posted by genevasub at 3:18 PM No comments: Links to this post 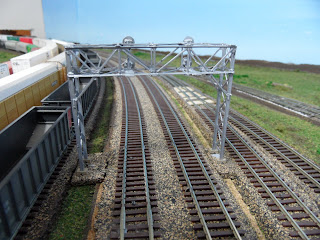 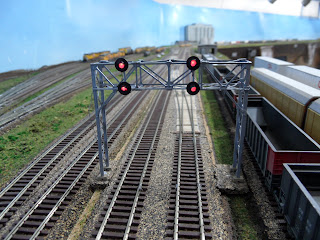 Posted by genevasub at 8:20 AM No comments: Links to this post

Its been quite a while since I last posted. This is mainly because I have not spent much time on the railroad as of late due to being very busy at school and then being out of town over spring break. Summer is just around the corner though and, as an educator, its the time I get the most done on the railroad. So, postings should be picking up dramatically very soon.

I did get a chance to build a signal bridge for the east entrance to the Proviso Yard off the UP double track mainline. The bridge is a plastic kit from NJ International, while the signals were assembled using BLMA brass searchlight target signal kits and Red/Green LEDs from Scale Models Division. I modified the kits a bit and only used the Targets, visor and mounts. The LEDs themselves serve as the casing of the signal heads.  I will be painting the signal bridge and signals this weekend.

I only have one more signal bridge to build along with a couple of dwarf signals to complete the signaling system on the UPRR Geneva Subdivision. 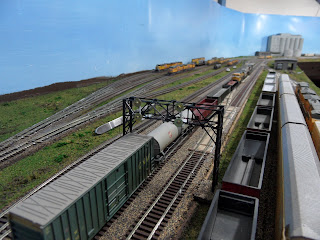 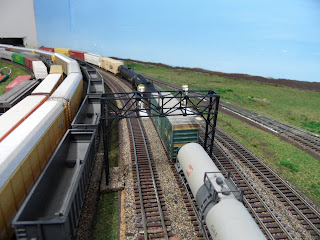 Posted by genevasub at 5:56 PM No comments: Links to this post