Just another video. Here's hoping for a snow day tomorrow! If so I'll post some more between office work.

Posted by genevasub at 2:19 PM No comments:

Laid the track for the Global III load/unload tracks. These two tracks will be embedded into concrete paving and surrounded on both sides with blacktop as per the prototype. In the photo you can also see the four yard tracks and the double track mainline. The first yard track will be the arrival/departure track while the other three will be for storage and classification. 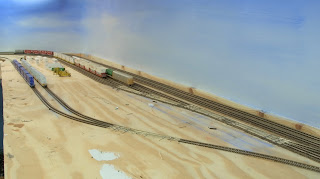 Posted by genevasub at 6:45 AM No comments:

Here's a project that's close to two years in the making. I've noticed that, every once in a while, you'll run across some UP units with faded paint and higher than normal amounts of weathering. Maybe from prolonged service in the southwest deserts California, AZ, and NM. Anyway, two year ago I decided it would be cool to have a few of these type units on the layout. I purchased a couple of undec Kato AC4400CW units and Microscale decals and set to work. I painted the units with Floquil UP Amour yellow faded a bit with reefer white. Then I got going on tearing down the Rochelle Sub and building the Geneva Sub and the units set in limbo for over a year. Finally got around to decaling the engines about 6 months ago and then they set again until I decided to weather these two units along with a number of other locos I had purchased over the last couple of years. I researched AC4400CW units on the UP without the flag and found a couple of appropriate road numbers. I wanted these to be without flags since all the UP units available from Kato had the flags and I wanted these to be unique. Also, I don't like the idea of the US flag being all messed up. Maybe UP is sensitive to this as well and makes more of an effort to keep these units clean?
To be honest, I don't think these are my best effort, but I am happy with the overall effect the units have on the look of the Geneva Sub UP motive power. Variety is a good thing! 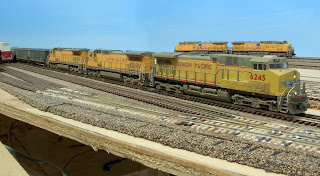 Posted by genevasub at 6:25 AM No comments:

Sorry, nothing really new to report. I did video some coal trains running through proviso. Not really very happy with the focus though.

Posted by genevasub at 5:02 AM No comments: